Brodo makes delicious bone broth, but their nutrition profiles are not amazing with only 7 g protein and 350 mg sodium. By reading this Brodo Bone Broth review, you'll get a more in-depth understanding of their products, how their made and if they are actually good for you.

Brodo is created by a famous chef with deep connections. For this reason, they came out with a major splash in 2014. Operating out of a restaurant, it was initially served by the cup in busy New York neighbourhoods.

They were one of the first to do this, so it brought them lots of fame and publicity. But are there products actually good for you? And do they really taste good? You'll want to read this to get all the necessary information.

Before we begin, I'll mention that I have a bone broth brand called Bluebird Provisions. We have 150% more protein and half the sodium compared to brodo.

If you're looking for an alternative that tastes delicious and has all the crucial amino acids like glycine, proline and glutamine, give it a try.

You may think this review is biased, but let me explain why it's not. I focus on only objective criteria in my reviews to keep them honest. These criteria are:

Now they operate several popular storefronts and restaurant windows in New York City. They were the first I know of the sell it in coffee cups with garlic, ginger and other blends and yummy add-ins.

They also sell it online and in stores like Whole Foods in the USA.

This article will cover FAQs, tips and provide feedback directly collected from real reviews to help you decide if it is right for you.

Is Brodo the same as bone broth?

The company named Brodo makes and sells bone broth. However, the actual word when translated means meat 'broth' or bone stock and pays homage to the founder's Italian roots.

Much like other bone broth brands, it comes in several ready-made varieties and bundles without fancy add-ins. If you're unfamiliar, it is used to fight inflammation, sleep, weight loss, gut health / heartburn and joint pain / arthritis.

Brodo's nutrition facts are straightforward. It is a meat broth with some healing qualities but misses two crucial things that you should be looking for. What are they? Read on below.

This will focus on their animal based stocks. They used to sell one kind with a mushroom / seaweed taste, but it looks like it has since been discontinued.

The chicken bone broth has only 7 g protein per cup. This is on the low end for nutrients of what you look for in a traditionally made, premium product.

Also, the sodium is 350 mg per cup, which is high for a chicken broth. There's no fat and no carbohydrates with 30 calories. Finally, one cup gives you 207 mg potassium, which is ok. For comparison, some brands like Bluebird Provisions have 400 mg potassium. Potassium is a crucial electrolyte for maintaining hydration and stable energy levels throughout your day. 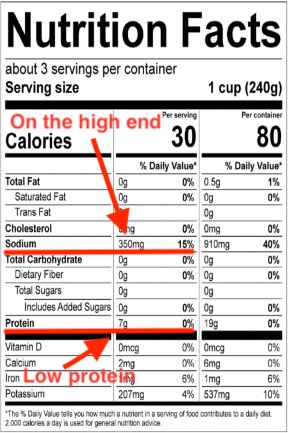 The hearth bone broth nutrition information is 45 calories per cup with 1 g carbohydrates and 9 grams of protein. You'll get 350 mg sodium or 15% of your daily recommended value along with 213 mg potassium.

Solid profile aside from the salt. If you are concerned about you salt intake, it may be high. If not, then you are probably fine. 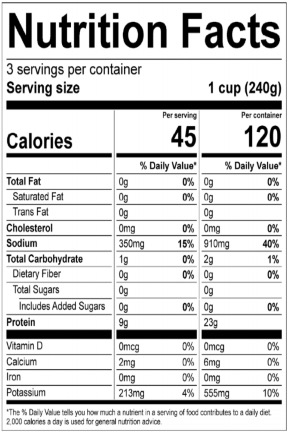 Brodo's beef broth has similar nutrient contents as the chicken, with one glaring caveat. The carbs. There are 3 grams of carbohydrates per 240 ml cup.

This is a lot of calories if you are following a keto or low carb diet. It's also too much if you are using bone broth for fasting. 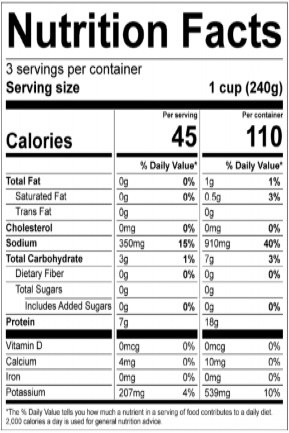 The key ingredients in Brodo bone broth are water, animal bones, vegetables, sea salt, peppercorns and bay leaves. Let's do a deep dive on each of them below.

You'll notice no apple cider vinegar in any of them. this is a good thing! You don't need it. 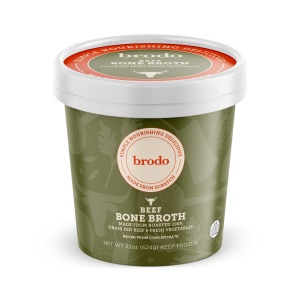 These inputs make it a great fit for any meal, from soup to risotto to rice.

Ingredients to be Aware of

There are no ingredients to be aware of based on the information I have. They do a great job using mostly organic ingredients and real knuckle bones instead of concentrates.

Is Brodo broth good for you?

Brodo is a high quality bone broth that doesn't use any artificial flavors, preservatives or extracts. For this reason it is good for you, but there are a few things that make hurt it compared to the best 6 bone broths you can find this year.

They don't use any concentrates or sketchy meat broths which makes it a good choice for you vs a lot of the garbage you find online these days. Also use it for chicken soup or to flavor bland tasting food.

How is Brodo made?

Brodo is made using a traditional approach to isolate collagen. They start by adding bones to a large steam kettle (like stock pots), then adding water. The whole mixture is brought to a boil, skimmed of impurities, then left for a simmering process of 12-24 hours. Part way through the total cook time, the vegetables and herbs are added to the steam kettle.

After the boil is complete, then kettle is drained through a fine mesh strainer and the broth is packaged into the containers they ship it in. Then these tubs are frozen. The end result is a delicious beverage with no shortcuts.

You can them thaw these containers out and pour it into a mug to warm up in the microwave.

Brodo Bone Broth tastes like a bone broth you would make at home. The expert reviews on taste are mostly positive, but you always find negative reviews. That is life.

Some people find that it tastes slightly salty with a strong, earthy beef flavor. It is a good choice for people looking for a low protein and high sodium broth.

Overall, Brodo bone broth reviews are positive in terms of taste. But negative in terms of delivery time and shipping. This is frustrating as a customer and as a brand owner because they have little to no control over shipping delays.

One customer mentioned how the broth was warm and spoiled by the time it arrived to them. Other expert reviewers love the taste and leave 5 star reviews as you can see below.

Finally, some reviewers mention the cost being an issue.

The Brodo Bone Broth costs $139.90 for a 10-Pack. It is not available in any smaller quantity, making your purchase a big commitment. 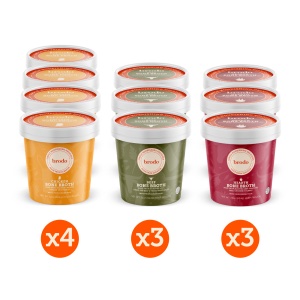 What is the highest rated bone broth?

The highest rated bone broth is Bluebird Provision's Instant Bone Broth Powder. You can find it online or on Amazon with many 5 star reviews.

Customers rate it highly because it is single ingredient using the highest quality non-gmo and pasture raised chicken bones. It has no nasty filler ingredients like natural flavors or yeast extracts and tastes absolutely delicious.

It is always good to compare differences head to head. If not, there we have no way of knowing the nutrition facts of one vs another.

The chart below compares them to Bluebird Provisions, one of the popular bone broth powder options that mixes perfectly into boiling water.

As you can see, Bluebird has almost double the protein and almost 1/3rd the sodium to Brodo. This is really adds up if you need the healing qualities and are drinking it weekly or daily.

If you need protein and electrolytes, then Bluebird is likely the better option. It is also available at a much lower cost at about $1.85 per cup compared to $5.59.

Brodo is packaged in ice cream style tubs. The product is sold and ships frozen. They use insulation and dry ice in order to keep it frozen during transport. You are usually ok to simply place in the fridge or freezer upon arrive.

The downside is that you are at the mercy of shipping companies who are often delayed. In this case, you may lose your entire batch due to it thawing and perishing because of a shipping delay.

On the other hand, Bluebird Provisions is shelf stable, meaning you have no possibility of it spoiling. You can get it through Prime in one day. Another one of the main differences is that Bluebird uses a 100% recyclable pouch

Brodo is a quality product because of the long simmering process and high integrity ingredients. They make it with a real approach, the ways you would on your stovetop to isolate the gelatin from the bone marrow.

That being said, I think that it lacks the protein you need to get maximum health benefits.

Because of the low protein, you are missing important amino acids like glycine, proline, glucosamine and glutamine. If you're looking for a bone broth that has way more protein and less salt, give Bluebird Provisions instant chicken bone broth a try.

It ticks all the nutritional boxes and tastes absolutely delicious.

The Honest Kitchen Bone Broth Review: Are The Ingredients Safe For Your Dog?